The Adventures of Super Letterman, Episode 1 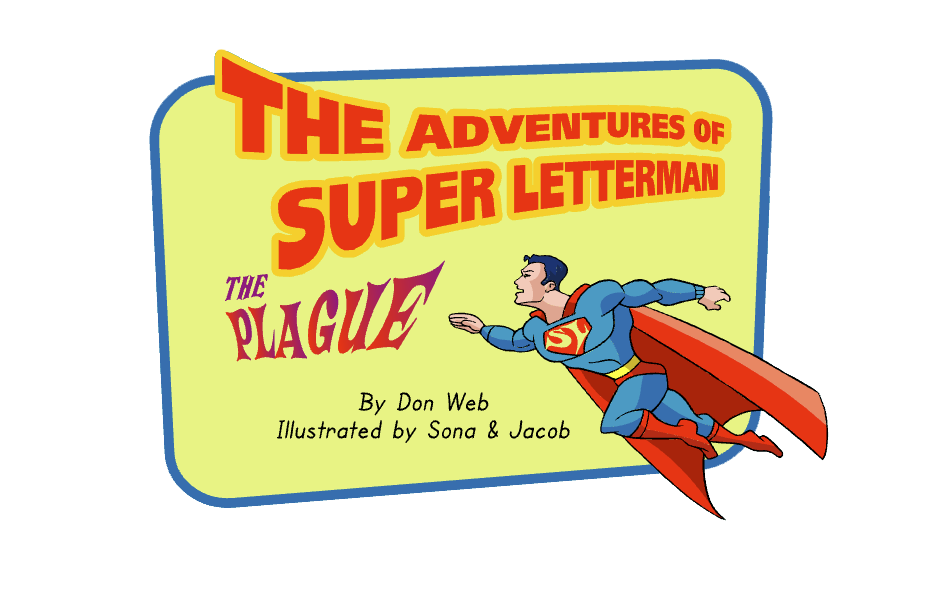 FRAME 1:
VISUAL: Jaws Yenek, an evil looking little man with a Dick Cheney scowl is gleefully rubbing his hands together as he looks up at the word “PLAGUE” in the sky.
VOICE OF YENEK: I’ve just unleashed a plague on the world. (followed by evil laughter).

FRAME 2:
VISUAL: People in the city are running in panic as the word “PLAGUE” looms above them like a Godzilla monster.
SOUND: People screaming in panic.
WOMAN IN THE CROWD: Where’s Super Letterman now that we really need him?

FRAME 3:
VISUAL: Super Letterman, our caped hero with the letter L on his chest, speeds through the sky toward the word PLAGUE, holding the letter Q in his hands.
HEROIC MUSIC
VOICE OF LETTERMAN: That evil Jaws Yenek has unleashed a plague on the world. But I’ll fix that! I’ll just replace the letter G with the letter Q…

FRAME 4:
VISUAL: Super Letterman flies up and sticks the letter Q in place of the letter G (the letter G flies off into space). Now the word in the sky is PLAQUE.
SFX: HARD KNOCK, LIKE A CUE BALL HITTING A POOL BALL
VOICE OF LETTERMAN: …and turn the plague into a plaque.

FRAME 5:
TRIUMPHANT MUSIC
VISUAL: A triumphant Super Letterman descends, proudly holding an engraved plaque. The word “PLAQUE” can still be seen in the sky, although it is now much smaller, as if it is moving away. Jaws Yenek slinks away in defeat.
ANNOUNCER: And so, Super Letterman snatches victory from the defeat of Jaws…proving once again that the right word can make a world of difference.
VOICE OF YENEK: Rats!

TRIUMPHANT MUSIC UP TO FINISH