The Adventures of Super Letterman, Episode 2 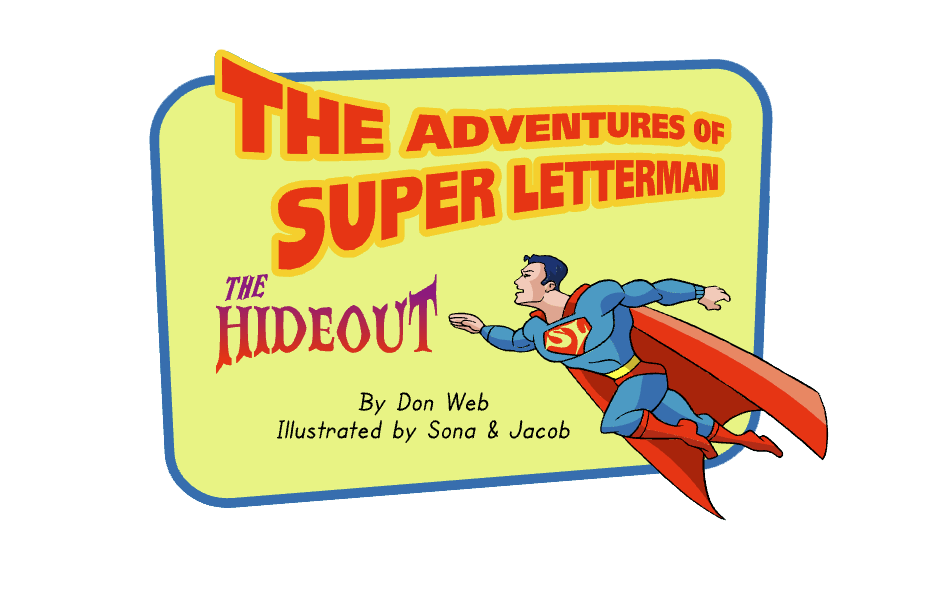 FRAME 1:
VISUAL: A heavy stone building with an iron door. A very large sign on top of the building reads YENEK’S HIDEOUT. Two burly policemen are using a battering ram trying to knock down the door, but they are having no effect whatsoever on the door. Jaus Yenek, an evil looking little man with a Dick Cheney scowl, is looking out the window of the building taunting the police.
VOICE OF YENEK: You’ll never get me, copper! My hideout is too strong. (taunting) Na-nee, na- nee, na-na. (followed by evil laughter).
VOICE OF EXHAUSTED POLICEMAN: He’s right. His hideout is too strong. Where’s Super Letterman now that we really need him?

FRAME 2:
VISUAL: Super Letterman speeds through the sky holding the letter S in his hands. The letter S is the same style as the letters in the sign.
HEROIC MUSIC
VOICE OF LETTERMAN: That evil Jaus Yenek is holed up in a hideout that’s too strong to crack. He’s even bragging about it with a sign on top. And that will be his undoing.

FRAME 4:
VISUAL: A triumphant Super Letterman is standing on the ground in front of the building holding an angry Jaus Yenek out at arm’s length. Yenek now looks hideous. His clothing is soiled, tattered and reeking, and there are stink lines emanating from him. The two policemen are holding their noses as they approach him with handcuffs. The sign with the words YENEK’S HIDEOUS is clearly visible.
TRIUMPHANT MUSIC
ANNOUNCER: And so, Super Letterman snatches victory from the defeat of Jaus…proving once again that the right word can make a world of difference.
VOICE OF SUPER LETTERMAN: Hideous is the right word for you, Yenek.
VOICE OF JAUS YENEK: Rats!

TRIUMPHANT MUSIC UP TO FINISH